Festivals, functions, special occasions, events, and other major gatherings. They all go well with sweets, and there are few sweets better than the juicy sweet from the Eastern part of India called Rasgulla. The sweet originated in Bengal and Orissa (a. k. a., Odisha). Rasgulla, a. k. a., Rosogolla, Roshogollah or Rasbari (depending on which Indian state you are in), is a syrupy sweet containing small, around balls of milk, cheese, chenna and semolina. One can boil the balls in a light syrup made of sugar, which continues until the sugar constitutes the balls. Whether you want a Rasgulla as a dessert, snack or whatever, they go well. For further details on how to prepare Rasgulla, go to source no. 7 in the sources section of this article.

Yes, we now know about the goodness of Rasgulla, but the question arises about the history/origins of the East Indian sweet.

We know where they started, but how did they start? How did it get so popular?

Famous British Chef, William Harold, mentioned in his journal about the Rasgulla, that it is a bowl of tender and syrupy cheese balls’. 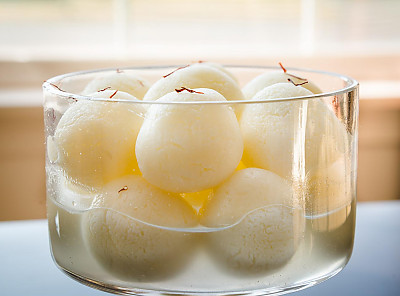 In Pahala–which is a hamlet on the outskirts of Bhubaneswar–the fact that priest taught villagers how to conserve milk via preparing Rasgulla.

The reason is that Pahala was home to more humans than cows, and there was always an excess milk supply. With an excess supply of milk, the chances of milk wastage increase.

It is from Solapur, which is near the Cuttack. The version of Rasgulla developed in Solapur was bigger, softer, and creamier with a velvety cream-like appearance, and got developed by a local confectioner, Bikalananda Kar. The confectioner devised and mastered the technique of steaming the cheese balls and allowing them to rise in sugar syrup.

According to the people of Orissa, this is how the modern-day Rasgulla got invented

According to the people of West Bengal, Rasgulla (a. k. a., Roshogollah). Bengalis claim that a gentleman named Nobin Chandra Das invented Rasgulla in 1868 and it gained popularity through the many generations of the Das family. The recipe underwent modifications Das wanted to make

Rasgulla is non-perishable so that it could sell on the market. Then his son, K.C. Das, began placing Rasgulla in cans, which resulted in the widespread availability of the sweet.

Also, there are religious theories that involve the Hindu goddess Mahalaxmi, and Lord Jaganath, which include the beginnings of Rasgulla.

Whatever the truth is about the origins of the Rasgulla and how it got created, one thing is certain though. I am hungry and I want a Rasgulla.