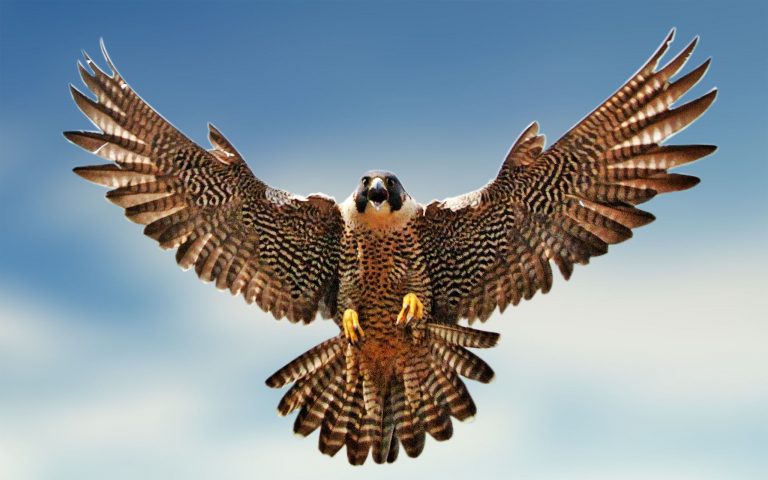 ​Peregrine Falcons are one of the main birds of Prey. They are the fastest animal in the world and are intelligent birds of prey.

They have unique characteristics and mannerisms that make them an intriguing animal. Peregrine falcons are one of the most distributed birds in the world. The birds live in a wide range of habitats across every continent except Antarctica.

Characteristics of the Peregrine falcon:

Their wingspan measures up to 120cm and they grow up to 58 cm tall. Peregrine’s vision is like binocular vision, which is eight times better than the average human eyesight. The Falcons speed can reach 300km/hr and sometimes, these birds can attain spectacular speeds of over 320km/hr, i.e., 200 mph. They generate their speed from their deep chest and powerful pectoral muscles, which also aid the bird’s manoeuvrability.

In addition, the deep chest (pectoral) muscles power the falcon’s tapered wings, helping them get the speed to overtake other birds. Its sharp talons that are a part of its large feet can kill its prey and aid the falcon in capturing prey.

The falcon’s sharp beak comprises a sharp, notched upper bill that can create serious damage. The bill can sever the spine of the peregrine falcon’s prey, including other birds of prey.

The falcon’s diet comprises a wide range of birds. In fact, the peregrine falcons hunt 2000 bird species, i.e., 1/5th of the bird species worldwide. They have incredible speed, a powerful bill, and talons. The Peregrine Falcon hunts birds such as pigeons, doves, shorebirds, songbirds, and ducks. Falcons also hunt other animals, including small mammals, lizards, and insects.

Nest, Habitat, and manner in which it hunts:

The falcons do a lot of preparation to make sure their nests comprise a big enough space for their eggs. Location, safety and access to food are just some factors that weigh into the falcon’s decision to prepare a nest.

Peregrines live in a wide range of landscapes. They prefer high cliffs as cliffs have nests of other birds. Most of those other birds are the birds upon which the peregrine prey upon. Also, the cliff edges provide a sense of security for Peregrines and the view from the cliff edges assists Peregrines in watching out for prey.

The Peregrines follow a curved flight trajectory while hunting its prey. They see objects when their head is at a 40-degree angle. However, a falcon cannot turn its head by over 50%, even when soaring at slow speeds. It goes towards its prey following a curved path, which helps the Peregrines reach their prey quicker.